3. Use games for learning

x2.  De-brief at end of session

One of the core beliefs of MoF is that learning happens best by doing. In other words, in order to learn to do something we need to spend time doing it.  Of course, there will be times when the teacher or coach needs to give input or help, and there will be times when children can learn a great deal by watching their peers and reflecting on their practice. However, we need to be careful that we get the balance correct.

Without adults involved, children would play uninterrupted. They will learn from this play, and they will generally enjoy it. As adults involved in children's play, we need to think about how we engage with the children so that our combined interventions to their play-time have an overall positive effect rather than a negative one. We need to add more than we take away.  In addition, we need to consider carefully the way we organise the activities and transitions between the activities, so that children's physical movement and 'learning by doing' time is maximised. 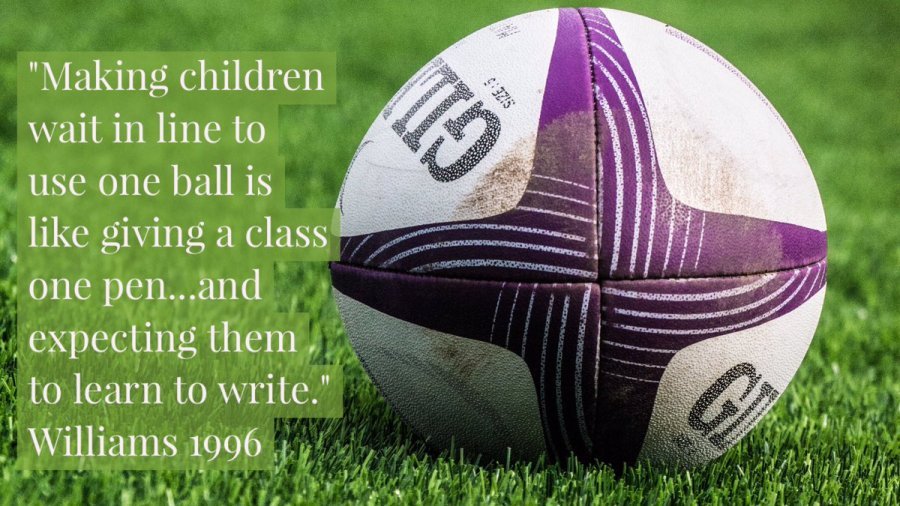 The flow chart below describes a recurring situation that we see often in school PE. When the children are sat still for long periods, of course they start to fidget and be disruptive. This happens because they are bored, frustrated and unchallenged. The teacher then needs to deal with this perceived misbehaviour, and this leads to more of the children's time spent sedentary and unengaged.

We need to find ways of breaking out of this cycle - or not getting into it in the first place. The key to this is to keep whole-group interventions short. We can't expect children to listen for long periods. We need to allow them to be good. 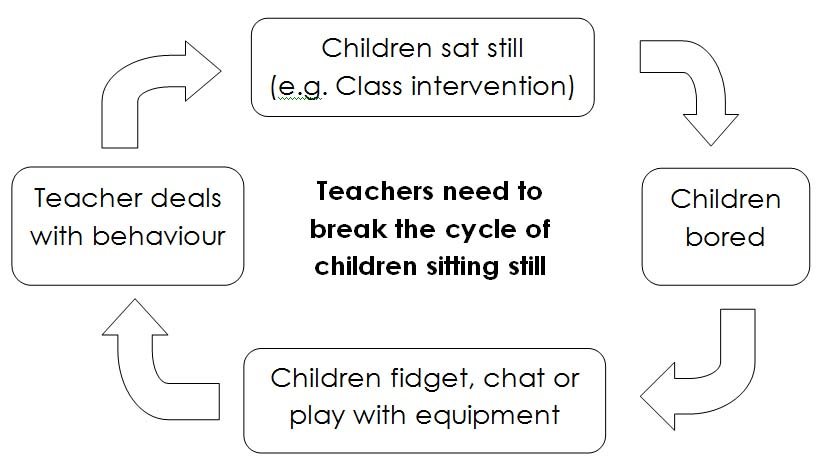 Active Learning Time is defined by MoF as: 'The amount of a session or activity, expressed as a %, that each child has the opportunity to physically move and learn by doing (on average)'

It does not include the following:

ALT is not meant to be a measurement of the quality of a session. It is just a guide as to how active the children are allowed to be.

At MoF, we aim for 75% of a session to be ALT. This means that in a one-hour session, the coach has 15 minutes of time which can be non-ALT. This sounds like a lot of time, but actually it takes a great deal of skill to run engaging, effective, high-ALT sessions.

Further reading on ALT and definitions:

Why do we want high ALT?

Firstly, for the purpose of skill development: We give high value to the number of times a child has a chance to do something physically, as we feel that this is a key part of learning to do new physical things. ALT also recognises that we need to be cautious and subtle in our role as a coach; we are an addition to children's play time, not an essential part of it. Secondly, in our experience of managing groups of children, they are best behaved and most engaged when they are doing rather than listening.

"A great pianist doesn't run around the piano or do push-ups with the tips of his fingers. To be great he plays the piano." - Jose Mourinho

So many children nowadays only do an hour or two of football a week. This is nowhere near enough to develop the skill needed to play at the top level. Coaches need to make sure that all children get as many (appropriate) learning opportunities as possible during the session.

Imagine a MoF session that started three minutes late; did a warm-up with at least a minute of teacher-talking time; took two minutes to split the group into two groups; had a high amount of teacher-talking-time during the first part of the session (another minute); had two long drink breaks lasting four minutes each; used an activity where players sat down for 10 minutes, only being involved for a minute each; took five minutes to get the players into teams for games; during the game - the ball was often in the GK hands, or being collected from other side of hall (two minutes); and ended two minutes early.

We only have an hour. MoF sessions should contain more ball touches, more decisions, more play, more involvement, more mistakes, more successes, and more energy than any other football sessions. MoF coaches need to work hard to make sure every minute is a minute well-spent.

What type of practice is needed  to create the elite footballer? Research says that it takes 10,000 hours of practice to create an elite adult sportsperson. But other research has shown that the average 40-minute school PE lesson contains just 8 minutes of activity. Surely there is a massive difference between a footballer who experiences 10,000 hours of school PE lessons and a footballer who experiences 10,000 hours in an intense and positive, high-quality, learning environment. As coaches we have a responsibility to maximise the amount of learning that happens in every session for every child.

The video below is from a one-hour class with 7-8 year olds. They are working on the Problem Statement: "How to use Feints and Dummies to Beat an Opponent".

The video shows all the whole-group or part-group coaching interventions in the session, totalling 13 minutes. The video does not show the non-coached parts of the session. It is not a perfect session and some of the coach interventions may not be effective or succinct. However, there are some good examples of the following:

MoF has developed a Measurement Sheet for ALT.

Coaches could learn from using this Measurement Sheet to observe other coaches in action (and to provide them feedback on their coaching intervention times). The process of measuring ALT in someone else's session is a useful one, as it provides a closer inspection of how long interventions really are, and whether they are actually needed or effective.

Provided below is a typical MoF session, with ALT measurements provided for each stage of the session. Coaches could usefully watch this session using the Measurement Sheet to calculate ALT, and compare their results with those in the video:

Our Coach Education group is set-up to share ideas and best practice among football coaches. We look forward to connecting with you.

Tips, advice, session plans and ideas, connect with other coaches
We won't share your information with anyone else. You can unsubscribe anytime